I am a engineer and entreprenuer with 9 years of experience in the tech industry.

How I added a Solar Powered Fridge to my Car

I have at various points over the past few years had van envy. That is to say jealousy of people with tricked out sprinter vans with fridges, full beds & kitchens. Having been on my fair share of month-plus long road trips the appeal and utility was not lost on me. That said I was never ready to shell out $40k for one of my own, nor was I interested in becoming a master carpenter and building out my own shell (perhaps someday). Not to mention the fact that I just paid off the loan on my trusty Subaru Forester so it seemed foolish to commit myself financially to another vehicle when the one I had worked so...alright.

One of the items I was most jealous of in tricked out Sprinters was the fridges! Being able to live off the grid with cold beer and bacon seemed to good to pass up. So I didn't. I ended up tricking out my Subaru (or shall we call it a Camparu?) with a solar panel, aux battery & a fridge.

** this post is a work in progress. If you have any questions about what I did feel free to reach out through email or twitter

With all of these components I had a fridge that I could take on the road with me and run it overnight. You can even leave the fridge plugged in to the car while you drive and move it over to the battery once you park for the evening. Afte a trip or two with this set up it was clear the battery & fridge worked well together so it was time to kick things up a notch. Who wants to remember to unplug the fridge every time you turn the car off anyway!?

V1 - Hook your battery up to the alternator

Got all that!? Phew, that's a lot of little things. Don't worry this next part isn't too complicated. The next step is figuring out where these thing are going to go in your car/engine compartment.

Here are the important things you need to find:

Below you'll see the fuse box circled in red and a rubber plug in the firewall circled in blue. 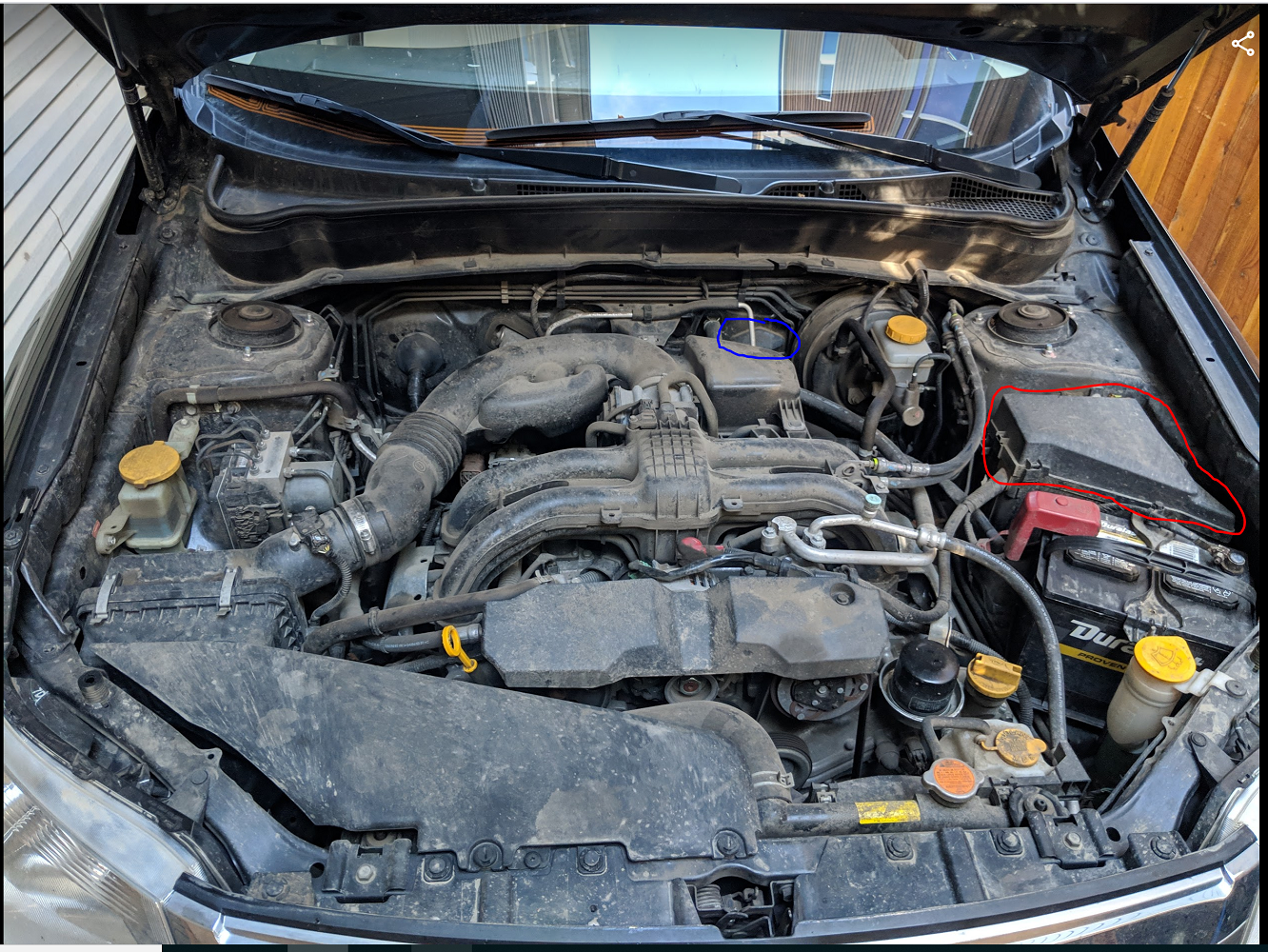 This might be one of the more difficult parts of the build. I found this hollow sheet metal tube running along the side of my engine compartment and figured why not drill some holes in it!? Once I'd drilled the holes I had to take out a bunch of bolts that helped attach the front side panel of my car to the sheet metal so I could fit my arm down there and hold the other side of the bolts/nuts to tighten the solenoid in place. I also covered everything in some black duct tape to make it look better? 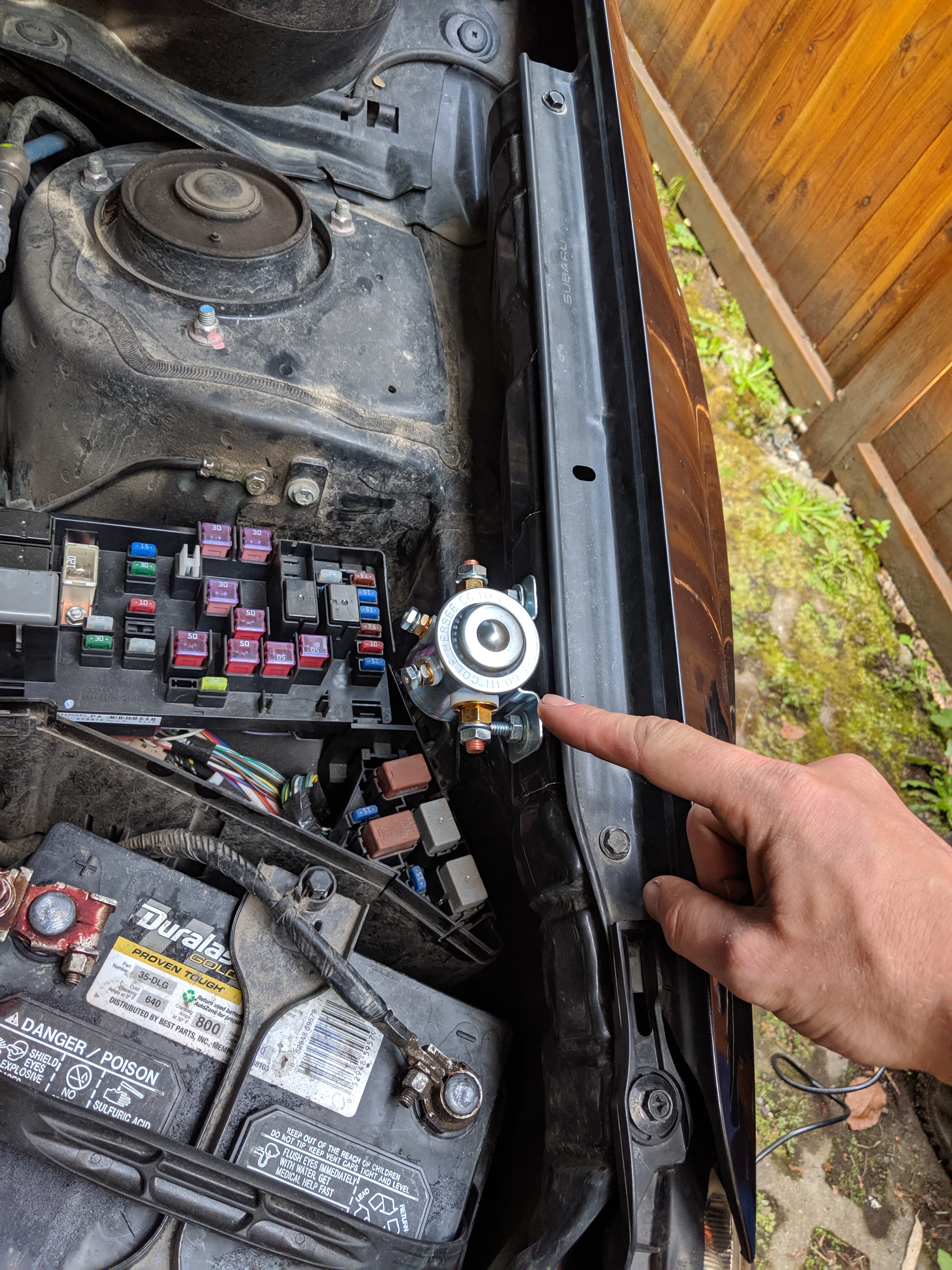 The lid to the fuse box can easily be removed if you undo the clips on the sides. Inside hopefully you'll find an empty socket. The one I use had 4 holes (you can see it below). Use the multimeter to measure the voltage across two of the terminals until you find one that has no power when the car is off and ~12+ volts when the car is on. Once you've found that you've got your trigger for the solenoid. 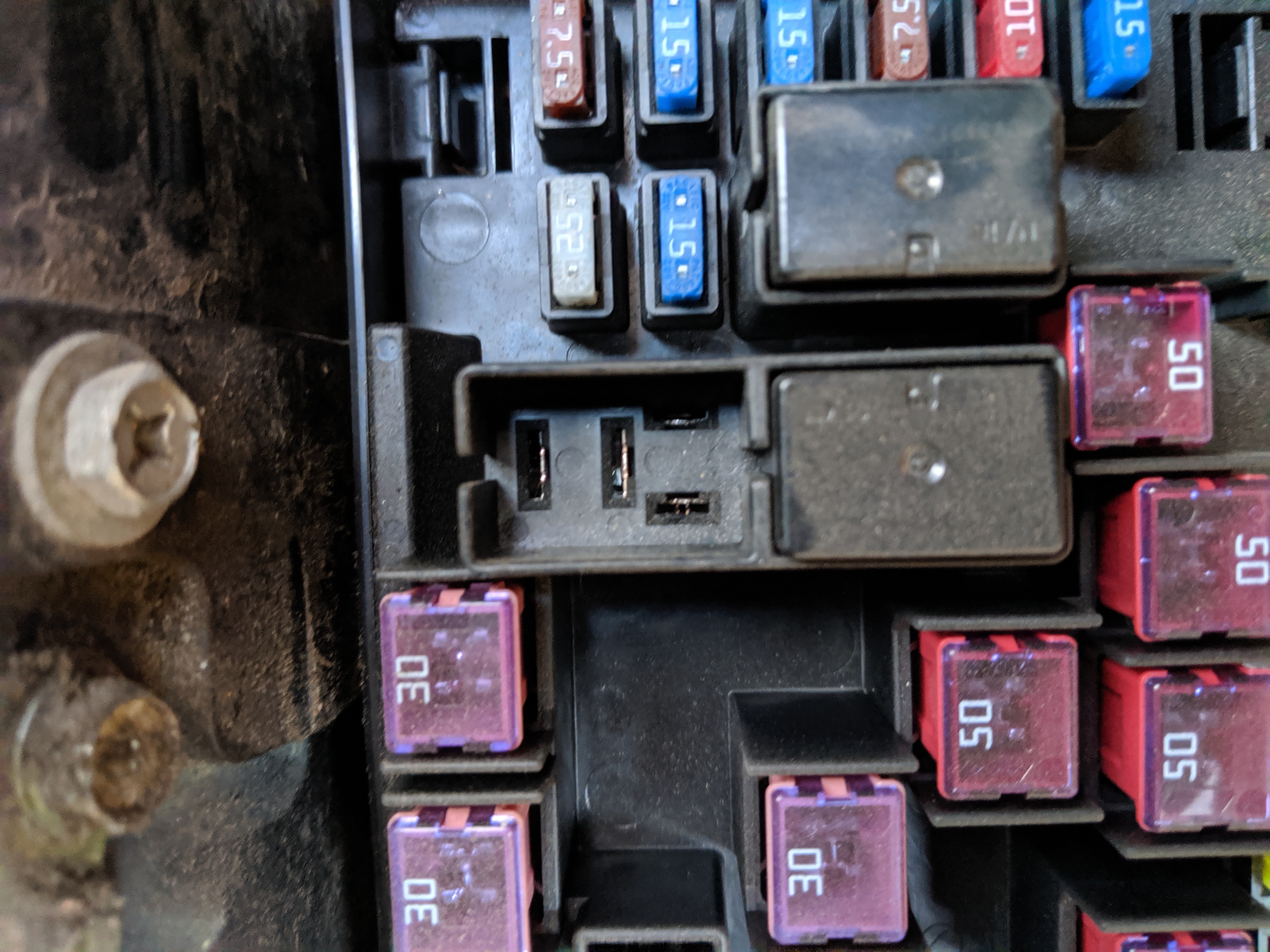 I then hooked the solenoid up to the fuse box using the 12 gauge wire + terminal crimps so I could plug it into the fuse socket. On my solenoid the input terminals (the ones that activate the switch i.e. the ones we want to hook up to the fuse box) are smaller. It doesn't matter which terminal you rig the fuse socket to, either direction you run current through the solenoid it should function. The other small terminal you will want to ground to the car body (I ran a 12awg wire from it to a bolt on the body). 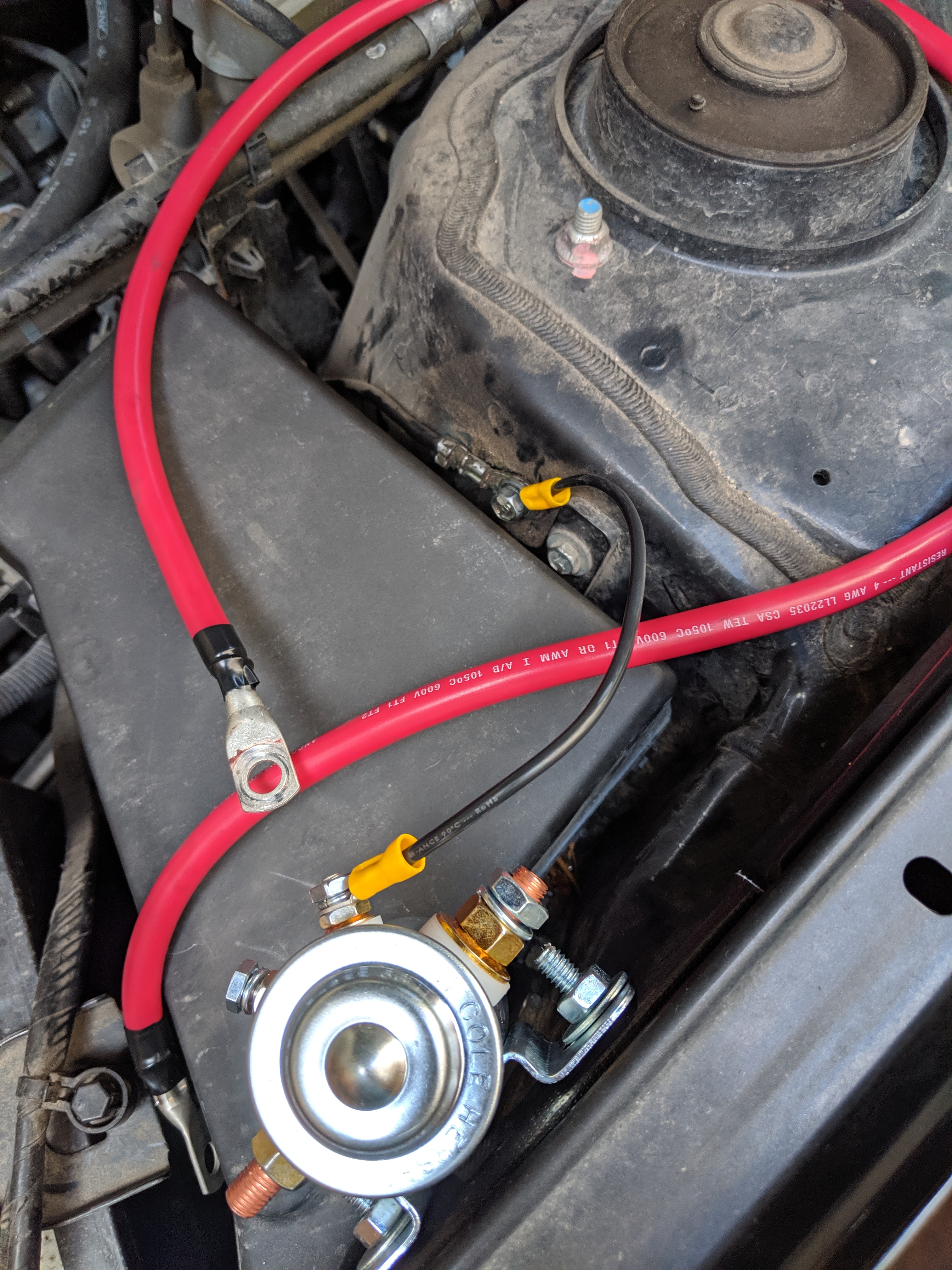 Once you've got this all set up it's time to run the 4 gauge cable from the battery (effectively the alternator), through the solenoid and to your AUX battery. I used inline circuit breakers on both ends (close to each battery) so that if any of my connections wear through & current starts running freely through the car the system will blow and not wear our my battery or catch anything on fire. The circuit breaker are nice because I can also use them as a switch and disconnect the system without having the remove any of the terminal connections.

In addition to hooking up the cable, you'll also need to figure out a way to get it from you engine compartment to your AUX battery. I keep my AUX battery in the trunk so I needed to run it all the way through my car. I ended up finding a rubber plug in the firewall of the engine that I was able to run the cable through. You only need a single cable because you can ground your AUX battery to the car body through a bolt in the back of the car. 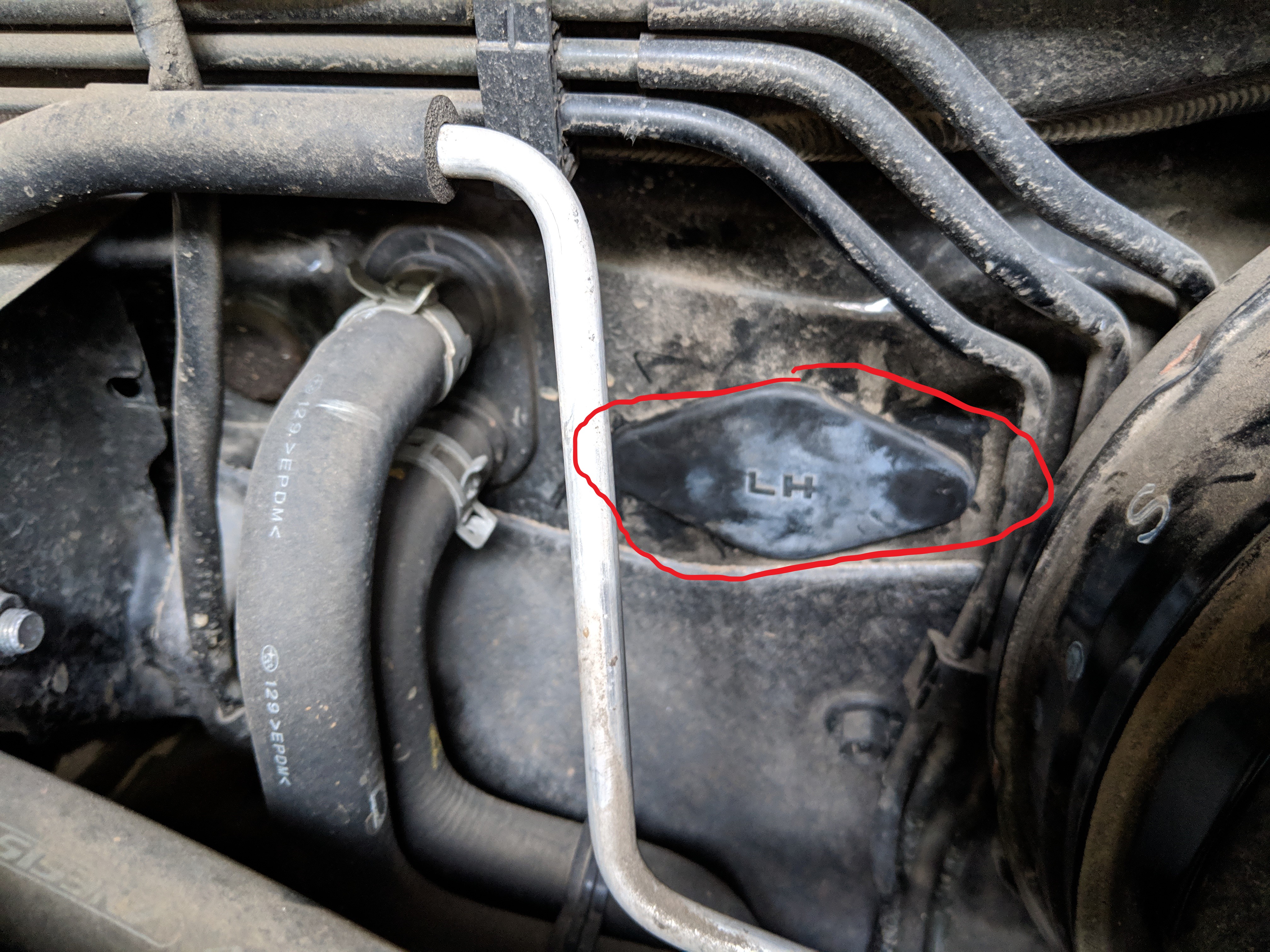 V2 - Hook the AUX battery up to solar

Having a fridge that you can use on the road is great and all, but what if you want to park your car for a few days and won't have the engine running to charge up the AUX battery? This is where solar comes in. My friend Tyler had recently installed a solar panel on the roof of his Outback and inspired me. My problem was realestate on my car for the panel. I have a roofbox, bike rack & an awning on my car's roof so there wasn't any room up there for the panel. Thaat left the hood of my car. I'd never seen anyone mount a solar panel on their car before but after a bit of google sleuthing I came across a thread of someone mounting a flexible panel to their Jeep hood...this was good enough for me to give it a shot!

Flexible panels are the way to go so you can make it as low profile as possible on your hood. I used double sided 3m tape to attach the panel and instead of putting that directly on my car's paint I decided to put on a vinyl so I could rip the whole thing off if needed.

The vinyl was actually the biggest expense of the whole project. I initially bought a $40 wrap to put on myself, but after botching it (it's really hard) I decided to pay someone to wrap the hood. I found a spot that did a nice job wrapping the hood for $350 which was more expensive than any other single thing that I bought for the whole project.

Once that was done, attaching the solar panel was pretty simple. I wrapped the edge using the edge guard and then used double sided tape to put it on. 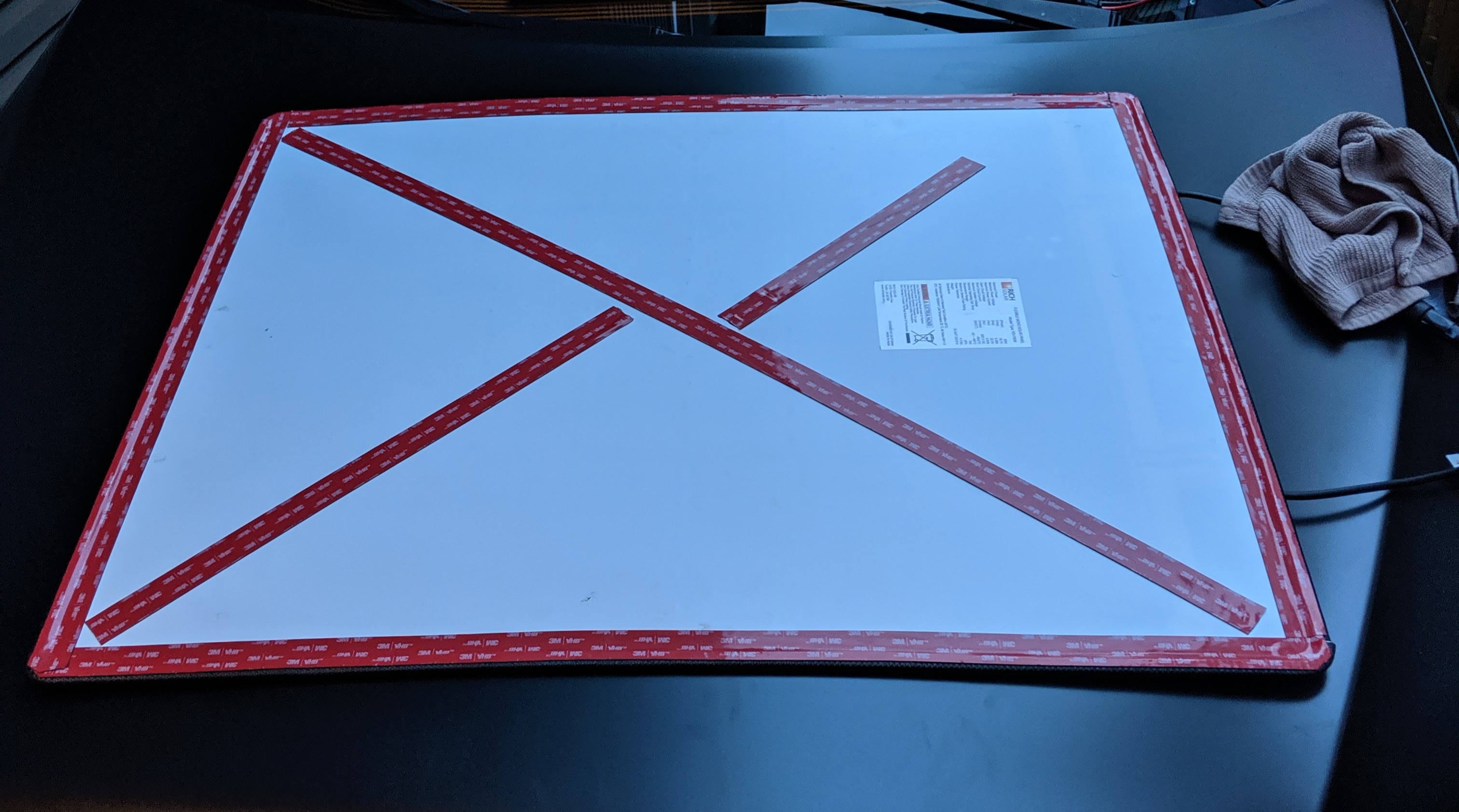 This might sound a little janky, but after a year and half with this on my hood through 2 summers, 1 winter, pleny of rain & snow and driving up to 80 miles per hour I've seen 0 indication that the tape is failing. It's holding up great!

I could've bought a black on black solar panel which probably would've looked a bit more descreet, but I was cheap and wanted to save $20. That and the obvious solar panel on my hood makes a great conversation piece...I have people ask me about it all the time. 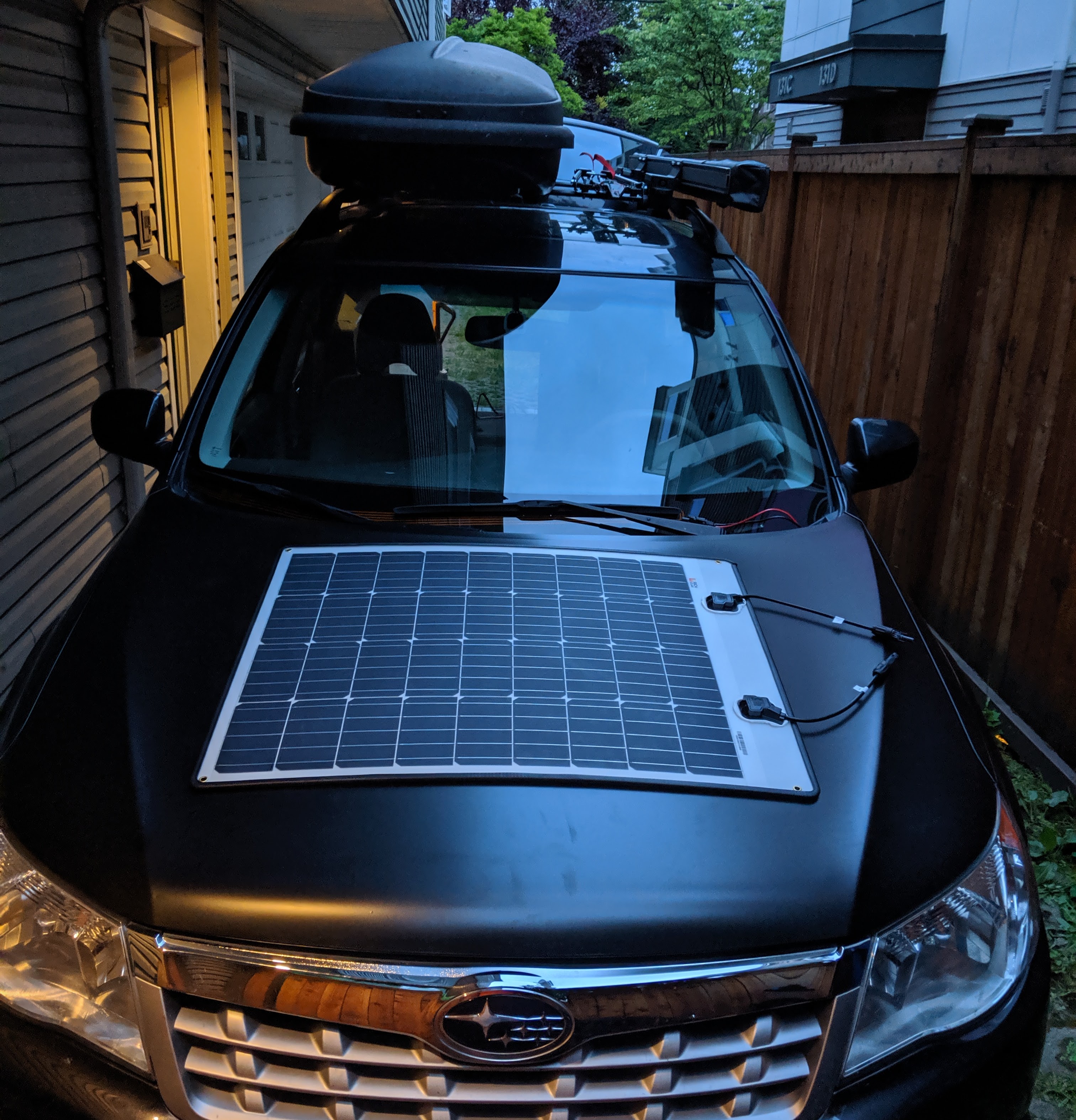 After getting the panel installed, I ran a flexible 10AWG cable from the panel, under my hood & then along side the 4AWG cable from my car battery all the way to the back of the car. For this one you'll need to run a connection from both connectors of the solar panel, you can't just ground it to the car (as far as I know).

I installed the solar controller in my trunk right next to my battery. 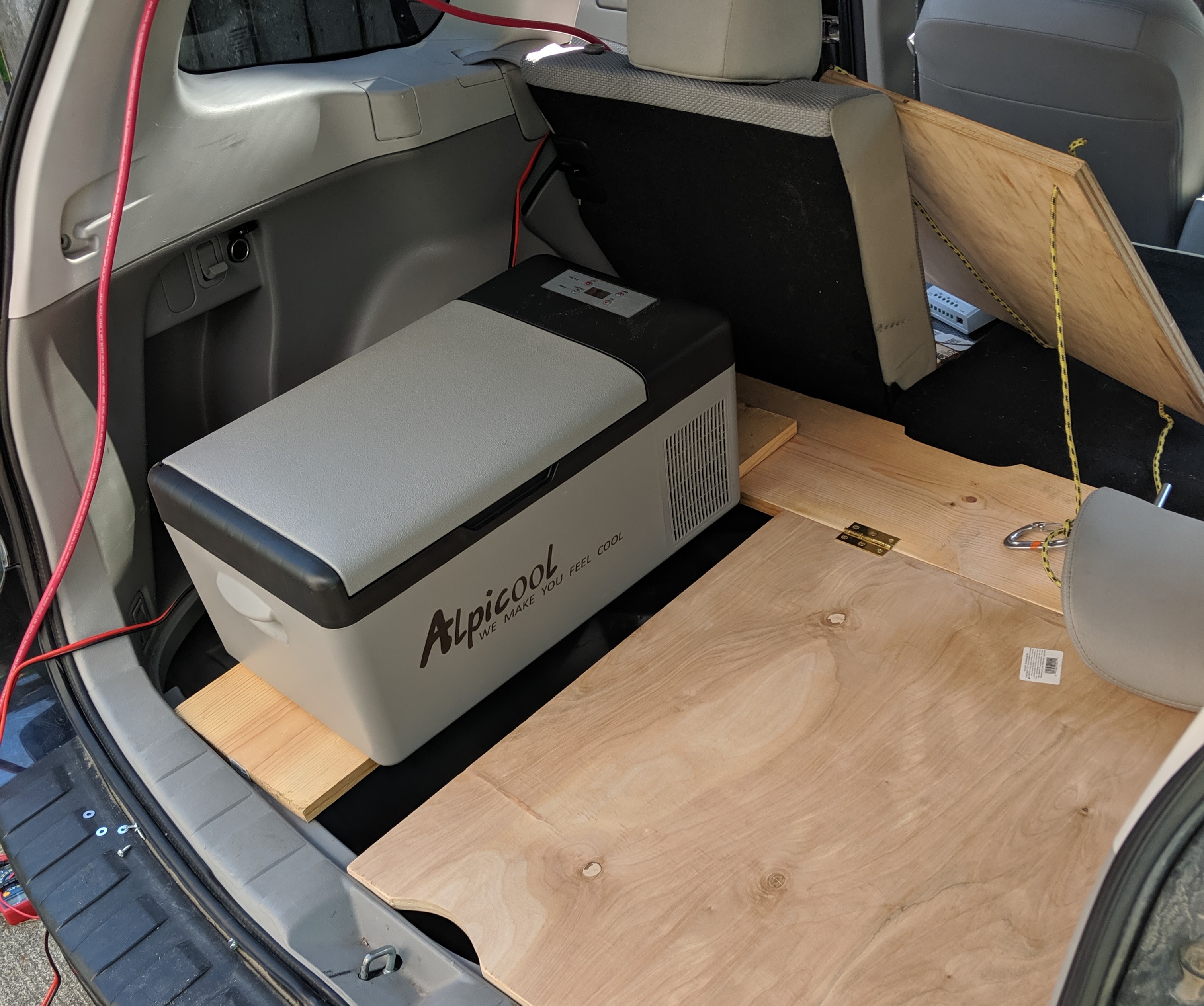 Voila, the AUX battery charges off my alternator while I'm driving and once I park it charges off of solar!